Is barcode cheaper than RFID or vice versa?

There is a myth prevailing in the whole industry that bar code is cheaper when compared to RFID and on the 35th birthday of bar code, New York Times ran an article which said:

Bar codes, after all, cost just half a cent each, while the electronic tags used in RFID cost more than 5 cents each

He has used a very simple example to state that the overall cost of implementing RFID is less when compared to barcode. Have a look:

Let’s say there are two apparel stores, each containing 15,000 items. The cost of the bar codes in Store A, at half a cent apiece, would be $75. The cost of the RFID tags in Store B, on the other hand, would be $750 at five cents-but just to be sure, let’s use a figure of $1,500, since the cost might be closer to 10 cents. In the course of a year, let’s say each company sells 250,000 items. The cost of the bar codes for Store A would be $1,250, while the RFID tags for Store B would cost $25,000. Bar codes look like a much better deal, sure-but remember, neither store has yet taken inventory.

Let’s say each location decides that in order to maintain an inventory accuracy of 98 percent, it will conduct inventory twice daily-once upon opening, and again when closing. Each day, two employees at Store A would take a total of 10 hours to scan the bar codes on every item. The total labor cost would be $100 per day, or $36,500, assuming the store remains open 365 days per year. At Store B, meanwhile, it would take one worker two hours to read all of the RFID tags. The total labor cost each day would, thus, be $20-or $7,300 per year.

Collecting the data necessary to operate efficiently with bar codes would thus cost Store A $37,750 ($1,250 for bar codes, plus $36,500 in labor), whereas it would cost Store B $32,300 to collect the data it requires ($25,000 in tags, plus $7,300 in labor). So collecting the information needed to maintain high inventory accuracy would actually cost more with bar codes than with RFID.

One needs to realize that when compared with bar codes, RFID completes the job faster and if measured then its 75 to 80% faster. Data collection with RFID is definitely cheaper as compared to barcode technology and is far more accurate and one doesn’t need to deploy too much labor. Even the overall sales seem to suffer as a result of wrong data and probably these factors are ignored by most of the companies and as a result they are not able to realize how much they tend to lose by not implementing RFID. 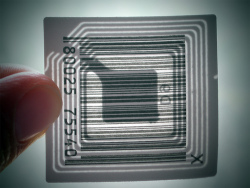